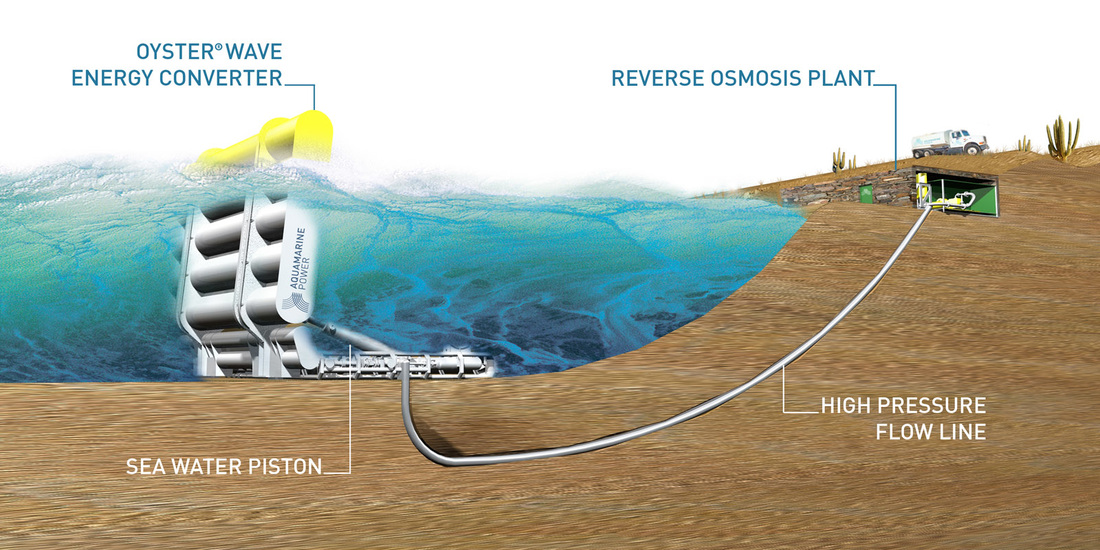 Wave power is generated by wind blowing over the surface of the ocean far out at sea.  The action of the wind transmits energy into waves.  These waves can travel vast distances with little energy loss before breaking on the shore.  Oyster device is designed to harness this energy and convert it into electricity.

Structural Components
The Oyster wave power device is a buoyant, hinged flap which is attached to the seabed. The Flap is connected to a piston which pumps high pressure water to the shore in phase with the wave motion.

Power Takeoff
Oyster's hinged flap, which is entirely underwater, pitches backwards and forwards in the nearshore waves.  The movement of the flap drives two hydraulic pistons which push high pressure water onshore via a subsea pipeline to drive a conventional hydro-electric turbine.
In the future, subsea pipelines will connect multiple Oyster wave energy devices to a single onshore plant.  Ultimately Oyster will be installed in wave farms of several hundred connected devices generating hundreds of megawatts of electricity.
By locating Oyster in the nearshore, we are able to capture a high proportion of the energy available in the ocean whilst avoiding the severe storms which occur further out to sea.

NOTE: The Case studies presented here onwards have a significant input from the Electric Power Research Institute (EPRI) report on wave energy converters although the authors have taken care to update as applicable on the current statuses of all the projects. The reader is cautioned that we have only presented the case studies for nearshore devices. The entire EPRI report (nearshore and Offshore) can be accessed through the link below.
Wave Energy Conversion case studies by epri
Independent Study of WECs done by Epri 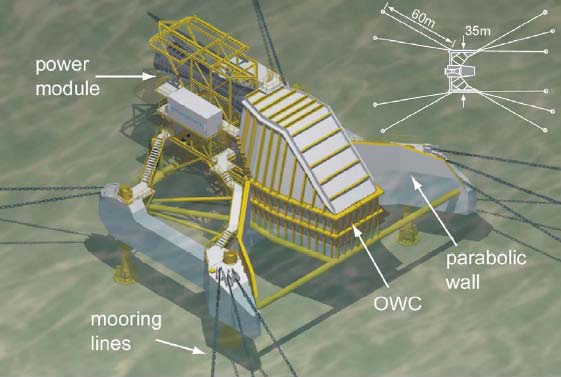 Energetech is developing an oscillating water column that can be deployed in water depths of up to 50m. The device features a parabolic focusing wall, which is used to focus waves onto the oscillating water column. The oscillating water column converts that motion into electrical energy. The key innovative feature of the device is the reversible (or 2 –way) variable pitch blade air turbine used which raises the average conversion efficiency from roughly 30% to 60% compared to the fixed pitch blade designs. While Energetech has originally focused on shore-based devices, this mooring configuration allows the device to be placed in water depths of up to 50m.
Specifications:
Parabolic Width: 35m
Structural Steel Weight: 450tons
Centerline Device Spacing: 60-90m
Rated Power: 500kW – 2MW (depending on wave climate and device dimensions)
Power Take Off: Variable Pitch Air Turbine
Water Depth: Shore based to 50m
Technical Issues
Structural Elements
The structure is a steel structure, which can be built locally using standard construction techniques. The structural design is well advanced, having undergone significant modeling and engineering efforts and is designed according to standard offshore construction standards.
Power Take Off
The power take off features a variable speed pitch blade air turbine, which has been designed specifically for the purpose of converting ocean wave energy. Being a special purpose machine and having a higher design complexity then the fixed pitch blade turbine, there are some risks associated to O&M activities with this element. However, the power take off has undergone significant theoretical modeling and lab testing and does not raise any significant concerns with respect to a demonstration.

Survivability / Failure Modes
The device was originally developed for a depth of about 10 m. Shallow water will limit the wave loads on structures because much of the energy of large waves is dissipated by the ocean floor. Larger waves will break before they reach the structure. In deeper waters, such natural limitation does no longer exist and can pose a hazard to the structure.

Cost
Energetech estimates the cost for a single device at $2.5 million – $3.0 million (2004 $) by 2006. For multiple devices, this cost would drop to roughly $2.0 million. For a commercial scale power plant, further cost reductions can be expected. Costs for mooring, interconnection, commissioning and O&M are not included in the above estimate.

State Applicability
Being a bottom-standing wave power conversion device, the device is well suited for shallow-water locations, which are primarily found on the US east coast. It will be able to exploit wave hot-spots in shallow water locations on the east coast. Hot spots are locations, where waves are being focused based on natural ocean floor features increasing the wave height. This device would greatly benefit from a detailed wave and bathymetry analysis to identify the location of such hot-spots in close proximity to shore as these locations have the potential to yield superior economics. 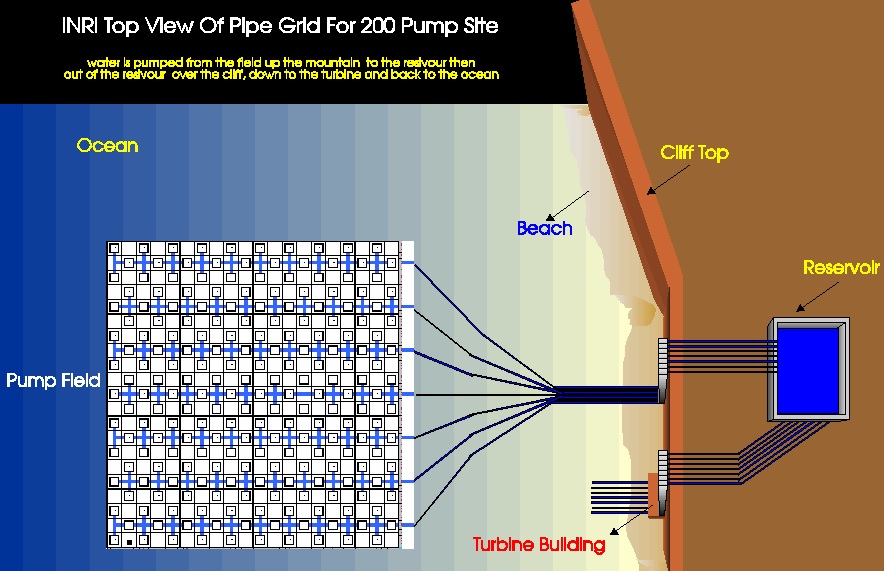 The SEADOG is a bottom mounted heaving buoy absorber. The device consists of a float, which is guided by linear bearings moving on vertical steel struts to move in heave only and a piston connecting the float to the ocean floor. The up and down movement of the float activates the piston pump which pumps sea-water. The SEADOG acts as a water pump, pumping seawater to an elevated basin on shore. The basin then discharges back to sea, driving a conventional hydro-turbine. The illustration below shows the SEADOG concept of the pump-field and power generation station.
Specifications:
Float Diameter: 5.7m
Structural Weight: 112 tons (mostly concrete ballast)
Centerline Device Spacing: 20m
Rated Power: Depends on wave climate and device dimensions
Power Take Off: Sea water pumping mechanism
Water Depth: 20m
Structural Elements
All structural elements are built from steel and concrete and could be manufactured locally in a construction yard. While the company has provided some design outlines, it has not yet gone through full-scale engineering and design efforts and survival loads have not been simulated or tested in wave tanks, which will be a critical element in establishing appropriate design criteria.
Power Take Off
The Power Take Off on the individual units is a simple water piston, pumping sea water through a sub-sea pipes to shore. While the individual pumping system is very simple and essentially consists of only a piston pump and two check-valves, it has no means of tuning to the wave climate for capturing maximum wave energy as the pumping pressure is fixed by the basin elevation on shore.
Survivability / Failure Modes
The devices floater could be filled with water and ballasted so that it completely submerses in storm conditions. This however will require an advance warning system and water pumps located on the float to ballast and de-ballast the system, adding additional complexities to the system. The company has not tested or simulated survival modes of the system and provided no information on what such survival loads on the system would be at present. These survival loads are a critical issue and will set the design requirements for all structural elements.
Operation & Maintenance
On-shore aspects of the power plant are not considered to be critical as they rely on established hydropower technology. Critical impacts on O&M cost will be submersed systems such as the sub-sea piping systems and the moorings. Bio-fouling and marine growth on piping and water pumps are considered critical as the system uses seawater.
The device is very site specific, requiring deep water in close proximity to shore (to reduce pipe length) and steep coastal features to locate an elevated basin to pump water into.
INRI built a 1/4-scale prototype that was tested by Texas A&M University using regular waves.
COST: Independent Natural Resources Inc estimated a costs of $2,997,000 to install a 750 KW, 16 pump SEADOG System. Included in this number are quotes from all service providers and manufacturers. This level of field installation includes quotes for pumps (materials and manufacturing), concrete pads, piping grid, dive teams, turbines with generators, grid tie inverters, reservoir tank, permitting, labor and assembly. 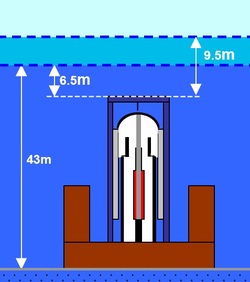 Wave Swing is a bottom standing completely submersed point absorber, with a linear direct generator to convert the oscillatory motion into electricity. The upper floater traps air inside, forming an effective spring element. Pressure differences on the top of the float (created by surface wave action), will set the top floater into motion and the system starts to oscillate. The device has been built in full-scale and deployment activities are underway.

Structural Elements
The structure is a steel structure that can be built locally using standard construction techniques available at most shipyards.
Power Take Off
The power take off used in the Wave Swing is a direct induction linear generator, which was purpose designed and built for this device. Direct induction generators have been considered for a number of devices and have the promise to significantly reduce operations and maintenance requirements on the device. It is unclear if such systems will prove to be economically competitive. The economic viability of submersed devices will depend largely on a high reliability rating, as costs to repair sub-sea systems are extremely high. As such, the choice of a direct induction system for the particular device is a good option.
Direct-acting, reciprocating linear electrical generators offer potential of efficiency and reliability than the more developed hydraulic turbine rotating electrical generator power take off systems. Hydraulic power conversion machines store energy in high-pressure accumulators and thereby provide a smooth electrical output. A direct acting linear generator has no storage and produces an electric output that varies from zero to rated power over a five to fifteen wave cycle period.
Failure Modes
The device can be effectively detuned in large waves by filling the sub-sea air chamber with water, effectively changing its spring-rate and therefore its oscillation frequency. Reaction forces can be effectively eliminated under these conditions. Being a submersed device, the impact in storm conditions is less severe.
Development Status
• Subscale wave tank testing at 1:20 and 1:50 scales in both regular and irregular waves have been conducted
• Numerical models have been developed and validated in wave tank testing
• A full scale pre-production prototype has been built and deployment on the seabed was achieved in May of 2004
COST: Unavailable

This device looks like a snake, floating on the ocean surface. The device consists of 4 tubular sections, connected by 3 hinges. The 4 sections move relative to each other and the hinges convert this motion by means of a digitally controlled hydraulic power conversion system. The total device length is 150m (450 feet), with a tube diameter of 4.63m. A full-scale pre-production prototype has been recently built and is currently undergoing sea-trials off the coast of Scotland.
Specifications:
Total Device Length: 150m
Device Diameter: 4.63m
Centerline Device Spacing: 150m (2-3 Rows stacked)
Structural Steel Weight: 380tons
Rated Power: 750kW (depending on wave climate)
Water Depth: >50m
Power Take Off: Hydraulic using bio-degradable fluids

Structural Elements
The structure is a steel structure that can be built locally using standard construction techniques available at most shipyards. The device structure has been designed using standard offshore construction standards and a leading offshore technology-consulting firm independently verified the design.
Power Take Off
Each hinge of the device contains its own hydraulic power take off. Each power take off contains a total of 3 hydraulic rams, which convert the motions into hydraulic pressure. Using accumulators and two 125kW generator sets, the hydraulic power is generating electricity. The hinges and power conversion mechanism have undergone full scale testing on a test-rig and have been integrated into the full-scale device. The hydraulic systems use biodegradable hydraulic fluids, which complies with the German ‘Blue Angel’ Environmental standard.
Survivability / Failure Modes
The Pelamis is very highly susceptible to damage due to the multitude of joints and connections, although in the initial design the makers claimed an excellent surviveability, they have been proven wrong as the Portugal government recently decomissioned a Pelamis farm citing high maintenance costs
COST: The cost for a single device is estimated by Ocean Power Delivery at $2 to $3 million. Cost of the mooring system is not included in the above estimate.
Powered by