WECs are generally categorized in three types viz. Attenuator, Point Absorbers & Terminators. In this section we are going to see basic categories and sub-types of WECs and their conceptual functioning. Finally, we will talk about the pros and cons of each type. 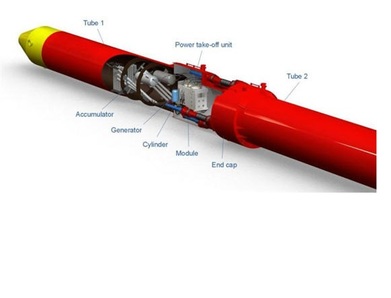 This device is a floating device which operates parallel to the wave direction and literally rides the waves. One of examples of this type is the well-known Pelamis developed by Ocean Power Delivery. These devices capture energy from the relative motion of the two arms as the wave passes them.
More particularly cylindrical steel are connected to other by two degree-of-freedom. Each joint contains the complete power conversion unit. Those joints are going to face both horizontal and vertical motions which are accommodated by four hydraulic cylinders. They act as a pumps which drive the fluid through a hydraulic motor which in turn drives an electrical generator. In addition, accumulators are used to decouple not only the primary circuit which is the pump but also the secondary circuit which is the motor. This allow to regulate the flow of fluid and thus produce a more constant generation.Those devices have to be at around 50m of the coast. 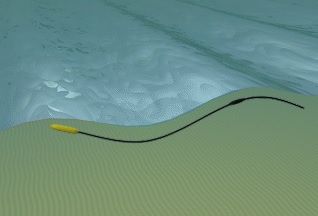 This technology consists of a tube, (typically 7 m diameter and 150 m long) filled with water. It is oriented in the direction of wave travel. The waves excite a bulge in the tube which travels just in front of the wave picking up energy and increasing progressively in size. The traveling bulge concentrates the energy from the sea and at the end of the tube the energy can be extracted to drive a turbine. 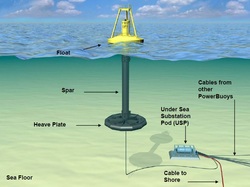 This type of device is a floating structure that will move up and down on the water surface or a submerged below the surface relying on pressure differential (Presented as a different type below). It absorbs the energy from all wave directions but because of their small size compare to the wave length, direction is not very important.
The point absorbers usually use translational motions as surge, sway and heave to produce electricity. Indeed, the energy will come from the motion of the buoyant top relative to the base. If we consider a floating buoy which has a generator at the bottom of the sea, all translations make a source for power generation. The larger the buoy is, the more energy can be absorbed as the exposed area to wave increases. However a larger buoy will cause an increase in diffraction forces. So to design a point absorber the key parameter is the amount of produced electricity wanted. Hence, it is needed to configure the entire system considering the dimensions, the mass and inertia of the system. So we are going to use an optimization algorithm for a selected site and use the given metocean data.
There are many examples of point absorbers. But the most well-known is the  Ocean Power Technology’s Powerbuoy. 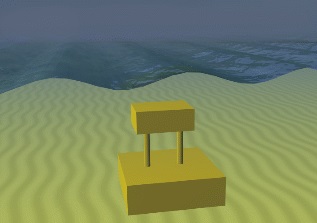 It uses the oscillating hydrodynamic pressure caused by passing waves.
Pressure Differential devices rely on oscillating hydrodynamic pressure caused by passing waves. The devices can be floating or fully submerged.
For submerged devices what we have is that waves pass over the device, creating a temporary vertical force on the body. Once the wave has passed, the reduced pressure differential causes the body to return down to its starting position. For floating devices it could utilize the increased pressure due to passing waves to compress air through a turbine.

The coming water are guided over a ramp to be elevated above the sea level in a reservoir. The kinematic energy of the wave is changed to potential energy in this way. Then, the water goes through hydro turbines. The rotation of the hydro turbines is transformed to electricity via a permanent magnet generator.
The most well-known device is Wave Dragon.

There are different key issues when you design a device like that.
First, the overtopping. The amount of water going to the reservoir is highly important  and affects the power production. Then the outlet, this means to amount of water passing turbines. So we have to design the size of reservoir, turbine design and the size of the energy converter in order to increase the production. In addition, we have to look at metocean in order to know the amount of energy in wave front and distribution of wave heights (Short-crested waves and wave spectrum). Those criteria are going to have considerable effects on design. 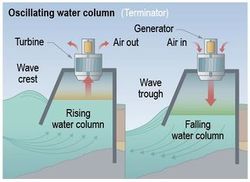 An OWC consists of a chamber with an opening to the sea below the waterline. As waves approach the device, water is forced into the chamber, applying pressure on the air within the chamber. This air escapes to atmosphere through a turbine. As the water retreats, air is then drawn in through the turbine. A low-pressure Wells turbine is often used in this application as it rotates in the same direction irrespective of the flow There are several ways to design a such device. They may be fixed to the seabed, mounted on a floating structure, hanged from a shoreline structure or built into harbor jetty. direction, removing the need to rectify the airflow. It has been suggested that one of the advantages of the OWC concept is its simplicity and robustness. There are examples of OWCs as point absorbers, as well as being built into the shoreline, where it acts as a terminator WEC. An example of a shoreline mounted device is the Wavegen Limpet. The device is installed on the island of Islay, Western Scotland, and produces power for the national grid. 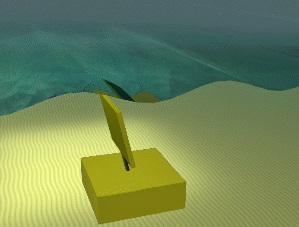 This kind of devices use the surge motion of the waves to induce oscillating motions of a body in the horizontal direction. OWSC are typically fixed directly to the sea bed near-shore where the water particle motion becomes more ellipsoidal in shape, but concept floating OSWC devices are under development. These are presented in more detail in the case studies section.