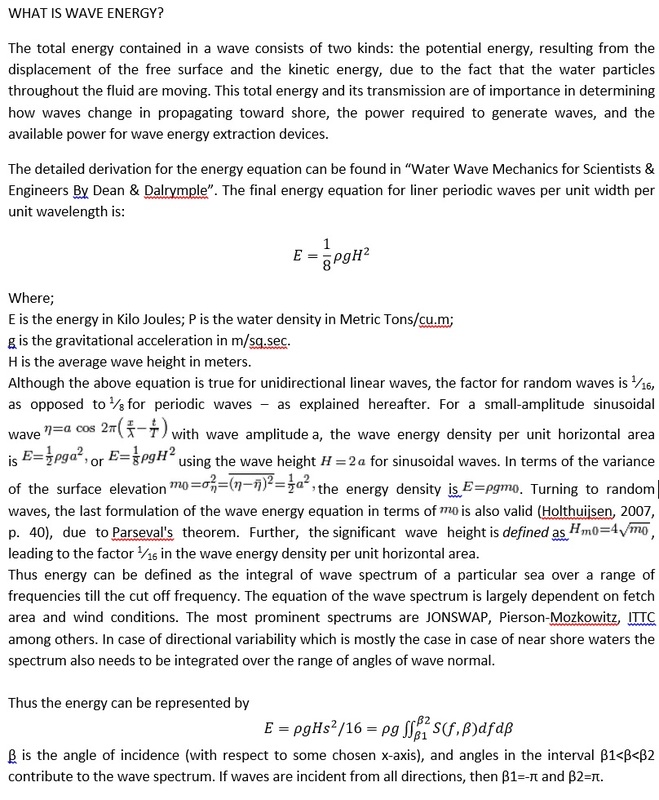 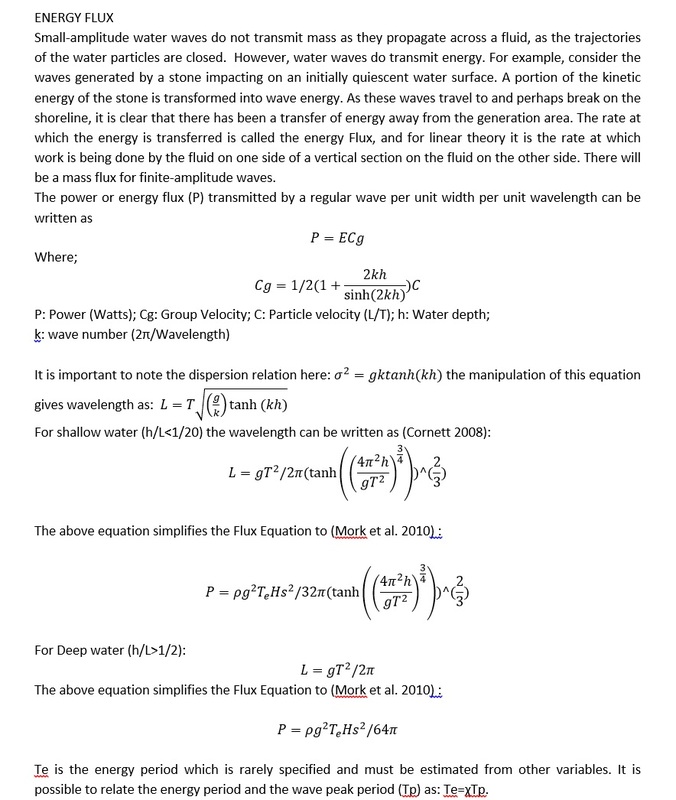 The coefficient χ depends on the shape of the wave spectrum e.g., for PM spectrum it is equal to 0.86 and for JONSWAP with peak factor of 3.3 it is 0.9. In some studies the energy period is assumed to be equal to Tp (Multon 2012). Thus we can say that the energy is transmitted at half the speed in shallow water as compared to deep water.
The wave loses energy, in particular in shallow water, mainly by wave breaking and by friction against the seabed. If the shore is rocky and steep sufficiently down into the water, then wave reflection may be more important than wave dissipation. The variability of wave conditions in coastal waters is, generally, very large compared to offshore waters. Near-shore variation in the wave climate is compounded by shallow-water physical processes such as wave refraction, which may cause local “hot spots” of high energy due to wave focusing particularly at headlands and areas of low energy in bays due to defocusing. In addition, other coastal wave processes such as wave reflection, diffraction, bottom friction and depth-induced breaking effects may have some influence which will be considered other sections.

As stated previously we are going to focus on the availability of wave energy along the coasts of United States of America. The buttons below are various government reports and resources which can be used to accurately predict the wave statistics in a particular area of interest.
MAPPING TOOL
Bureau OF OCEAN ENERGY MANAGEMENT STATISTICS
Assessment of wave energy resource  in united stated by epri

Near Shore Vs Offshore 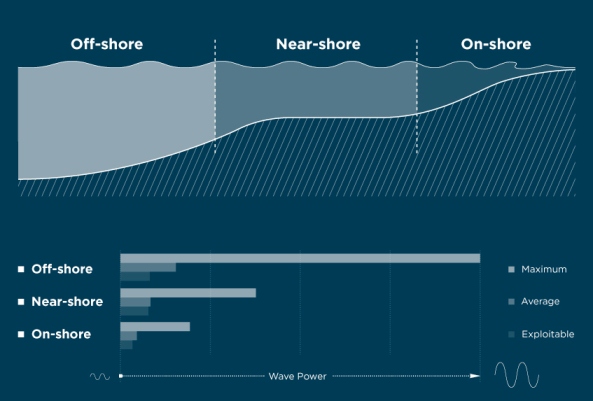 The review of wave energy resources given above, indicates the areas near USA where wave energy converters can exploit most of this clean energy resource. However, a more detailed analysis of wave climate characteristics indicates that there is also a clear distinction in conditions present in off-shore compared to near-shore waves. Taking into account technical and economic constraints, near-shore areas offer far more attractive opportunities for exploitation than other ocean areas. Near-shore locations provide only slightly fewer exploitable resources, but with far less extreme conditions, easier access and significantly easier design criterions, which results in far lower investment requirement per MW of generating capacity.

Filtering the highest waves. The extreme waves created during storms do not reach near-shore areas as they break in more shallow water. Wave energy converters installed in deeper waters have to weather these extreme conditions. Ensuring sustainability in this setting is very challenging not only from the technology viewpoint, but also from the cost perspective.

Narrower directional spread. Waves in deep water can travel in almost any direction, making energy extraction more difficult. However, as deep-water waves come closer to the shore they turn towards the shore. Consequently, devices located in near-shore areas encounter waves that almost always comes from the same direction, greatly improving the quantity of energy captured.

Highly exploitable wave power. The maximum wave height observed in near-shore areas is much closer to the average wave height. This narrower distribution of wave heights means that wave energy converters located in near-shore areas encounter more stable sea states that are closer to their normal operating conditions. This provides highly exploitable wave energy resources. On the contrary, off-shore locations are characterized by high gross wave power, but a much lower level of exploitable resources, due to extreme conditions.

Lower power transmission losses. Naturally, near-shore areas are closer to the shoreline than off-shore sites. A shorter distance to land means that electricity can be delivered to the grid with lower power losses also proximity to the shore significantly reduces the infrastructure costs.
Powered by